Chelsea put a troubled pre-season behind them to start their Premier League campaign with a 1-0 win at Everton on Saturday thanks to Jorginho’s penalty.

Blues boss Thomas Tuchel warned last week that Chelsea were “not ready” for the new season after a gruelling tour of the United States, which included a 4-0 thrashing at the hands of Arsenal, left his squad drained.

However, a new era at Stamford Bridge is picking up pace off the field with the signings of Marc Cucurella and Carney Chukwuemeka in recent days joining new arrivals Raheem Sterling and Kalidou Koulibaly.

Sterling, Koulibaly and Cucurella made their debuts as Chelsea ended a run of four consecutive defeats at Goodison Park despite a patchy performance.

“We have struggled in the last seasons to get points here and we have the points,” said Tuchel.

“A win is a win, it’s the most important thing, but we have to get better.

“We are maybe not at the highest level. We have brought players in but they came in late, pre-season was a bit turbulent but the last week of training was promising.”

Everton’s pre-season preparations were rocked this week by an injury that ruled England striker Dominic Calvert-Lewin out for the first six weeks of the season.

The Toffees suffered another injury blow early on when Ben Godfrey suffered a suspected broken leg after coming off worse in a challenge with Kai Havertz, while Yerry Mina limped off in the second half.

“When it rains, it pours,” said Everton boss Frank Lampard. “Ben Godfrey’s injury feels like it is a small fracture of his leg.

Everton have been predicted to struggle again after just staving off relegation last season.

But they could easily have taken at least a point from a spirited display.

Chelsea goalkeeper Edouard Mendy made a fine save to prevent James Tarkowski heading Everton in front on his debut.

Sterling was also denied a debut goal by the offside flag after he swept home after Jordan Pickford spilled Mason Mount’s shot.

Everton’s good work before the break was undone in the eighth minute of added on time for the lengthy stoppage for Godfrey’s injury.

Ben Chilwell was bundled over inside the box by Abdoulaye Doucoure and, unlike in the Euro 2020 final, Jorginho sent Pickford the wrong way from the spot for the decisive goal.

Everton pushed valiantly in search of an equaliser after the break, but were blunt in attack without the presence of Calvert-Lewin or the departed Richarlison.

But one goal was enough for Chelsea to end a five-year wait to win away to Everton. 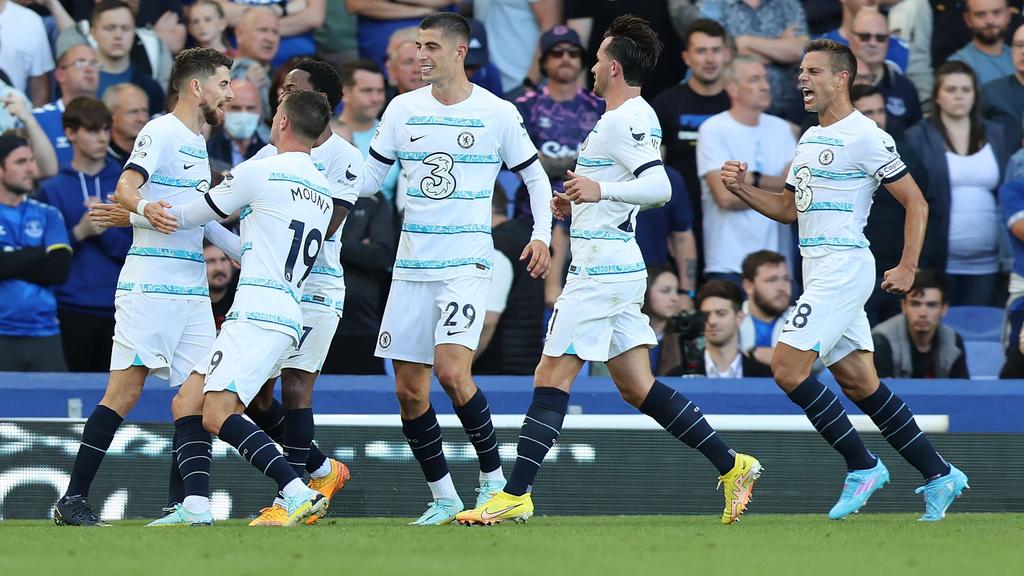